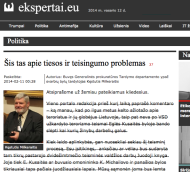 During the night from Tuesday to Wednesday, the portal ekspertai.eu received unexpected guests. A little after two in the morning the server was hacked and there was some vandalism. Opinions on problems of truth and justice written by former investigator of particularly important cases at the General Prosecutor's Office Investigation Department and second term Seimas Ombudsmen Kestutis Milkeraitis were crossed out.

A server consultant who commented on this event said that such an intrusion could have only been done by a professional with experience in IT technology.

Lithuania's Confederation of Manufacturers supports the introduction of the euro

Valery Ivanov says that the January 13th events were staged